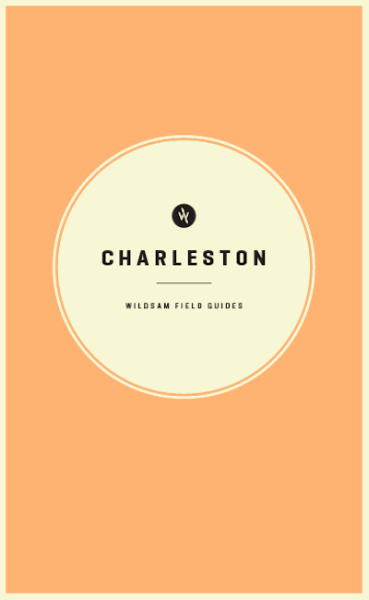 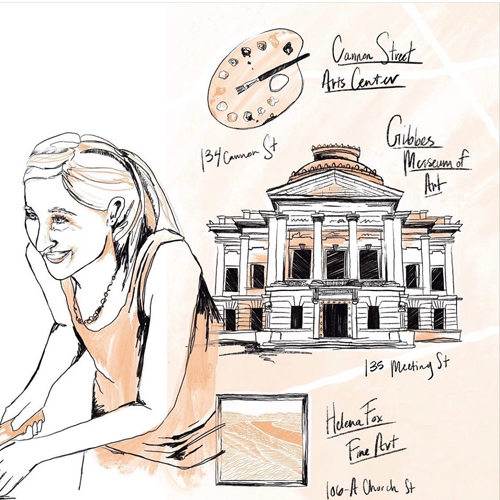 Kaminer Haislip was a Contributor to the Wildsam Field Guide first Charleston, South Carolina edition and now the second edition is available. A new illustration of her with Helena Fox Fine Art Gallery, her Charleston gallery representative, was added to this updated version by the incredibly talented Stitch Design Co based in Charleston.

Order your copy of this insightful travel book to read her interview at https://www.wildsam.com/collections/city-guides/products/charleston-2nd-edition

“For tireless seekers of the authentic.”
– The Wall Street Journal

New South Finds is an online magazine by Linda Jerkins, a longtime newspaper features writer who wrote a column called Southern Made for the Atlanta Journal Constitution. In the column, which appeared twice a month for six years, she profiled more than 400 artists from across the South, including Kaminer Haislip. Her enthusiasm for discovering and writing about Southern artists and their work continues with newsouthfinds.com.

She and Kaminer recently reconnected and she interviewed Kaminer about her current artwork for the December issue of New South Finds. The lovely, complimentary feature is below.

Kaminer Haislip wasn’t born with a silver spoon in her mouth. But she creates stunning silver spoons and more in her South Carolina studio.

The artist: Haislip grew up in Aiken, SC, and worked in high school at her family’s True Value hardware and appliance store, cutting keys and working around lots of tools and equipment.

The experience influenced her interest in sculpture, jewelry and working with her hands. So she signed up for an industrial tech class to learn how to weld.

After high school, Haislip earned a BFA in jewelry and metals and an MFA in silversmithing and design from Winthrop University. There she studied under Alfred Ward, an internationally acclaimed silversmith from London.

The company: Founded in 2005, Kaminer Haislip Designer + Silversmith is based in Charleston.

Inspiration: The concept of enhancing domestic rituals through traditional silversmithing techniques coupled with a contemporary yet timeless design.

“For me, using a thought-inspiring yet functional teapot enhances the process of making tea,” she said. “When a beautiful, well-designed object and domestic ritual are united, a connection between person and object occurs — and an appreciation of function results.”

Fun, special or unusual requests: Custom-designed commissioned work is a big part of her business. This year she had one large commission that stood out.

“It was a large silver globe titled ‘Mother Earth’ (pictured right) that required many different processes and a lot of problem solving. It was one of the most complicated objects I have ever made and I really enjoyed the challenge.

– A silver sculpture titled “Pillinger” created with designer Constantin Boym for the Museum of the City of New York’s exhibition, “New York Silver, Then and Now” in 2017.

– A silver Magnolia Bowl for Draper James, a Southern lifestyle company founded by Reese Witherspoon in 2015.

Where to buy: kaminerhaislip.com. Also at Helena Fox Fine Art in Charleston.

Drop in from 12-4pm on Friday or Saturday to meet the artist and shop her collection. 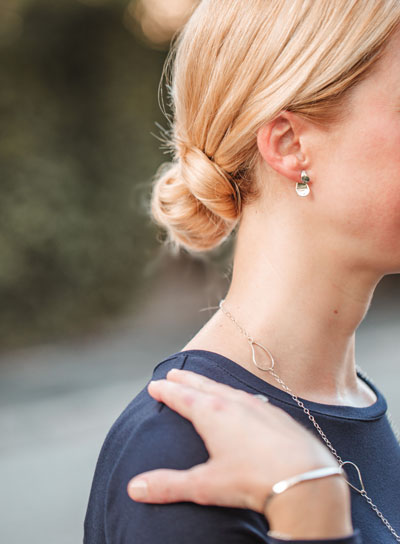 A native of South Carolina, Kaminer Haislip grew up in her family’s hardware and appliance business in Aiken. From there she followed her dream of working with fire and metal. After graduating with a MFA from Winthrop University, Ms. Haislip made her way to Charleston, in her words ‘my process is directly tied to the city’s immense craft traditions. As a silversmith working in Charleston, I am carrying on the legacy of the city’s rich history by employing techniques that have been used for centuries.’ And she is the only female silversmith practicing in Charleston today.

This year has been a bit different for all of us, and we couldn’t be more excited to welcome you all back to the gallery for an event! We will be featuring Kaminer’s new Christmas ornaments and table ware along with her much loved oyster series of jewelry. Early enough to be thinking about gift giving as well as time to get your gifts engraved if you are interested.

We will be offering a few private appointments before and after our regular gallery hours for anyone interested. If you have a group of friends that may want to come in together, we recommend this option.

Join us for what we think will be a great start to the shopping season!