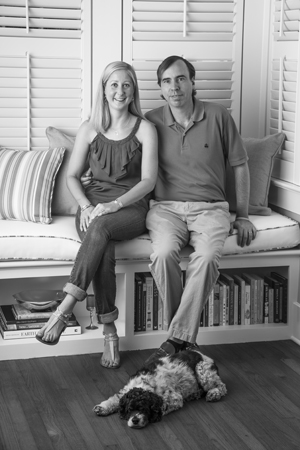 A native of Aiken, South Carolina, I grew up in my family’s hardware and appliance business. This experience directly influenced my interest in creating three-dimensional objects and working with my hands. During high school I became enthusiastic about sculpture and jewelry, so I enrolled in the industrial tech class and learned to weld.

I attended Winthrop University for my Bachelor of Fine Arts in Jewelry and Metals and Master of Fine Arts in Silversmithing and Design with a minor in Sculpture. While earning my MFA, I interned at the Mint Museum of Craft + Design, taught the Jewelry II and III classes as well as jewelry workshops at Winthrop University. For both of my degrees I studied under Alfred Ward, an internationally acclaimed English silversmith from London.

After graduation, I moved to Charleston, South Carolina and established my studio. I design and create all of my original, handcrafted designs utilizing techniques that have been used for centuries. Inspired by Charleston’s extensive silversmithing tradition, I am dedicated to carrying forth that legacy. In addition to my work as an artist, I am frequently commissioned by individuals to create unique objects and jewelry in silver and gold.

My work has been exhibited internationally and nationally, featured in over sixty publications including Metalsmith, The Magazine Antiques, Traditional Home, Elle Décor, Garden & Gun, Southern Living, Charleston Magazine, Charleston Weddings, and on the TV show Handcrafted America. I was honored with the Made in the South Award in the Home category from Garden & Gun magazine and with The Eric Berg Prize for Excellence in Metal at the Philadelphia Museum of Art Craft Show. Additionally, Historic Charleston Foundation honored me with the Samuel Gaillard Stoney Conservation Craftsmanship Award. I am an active member of the Daughters of the American Revolution and the national organization has awarded me four American Heritage Competition awards for my artwork. Finally, I collaborated with Reese Witherspoon’s Southern lifestyle company Draper James on an exclusive silver bowl.