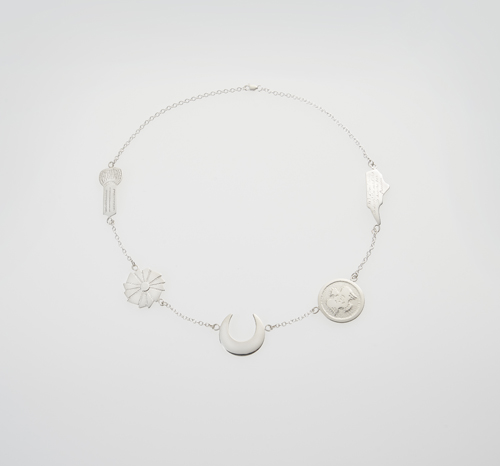 I am so incredibly proud to announce I have been honored by the Daughters of the American Revolution with a prestigious award for the annual American Heritage Competition. My sterling silver necklace Captain Joshua Hadley was awarded the American Heritage Award for Crafts, First Place in the Jewelry category! It is such an honor and privilege to receive this prominent award for my artwork. The theme this year was Rise, and Shine Your Light on Your Revolutionary War Patriot and Captain Joshua Hadley is my great-great-great-great-great grandfather and DAR Patriot. 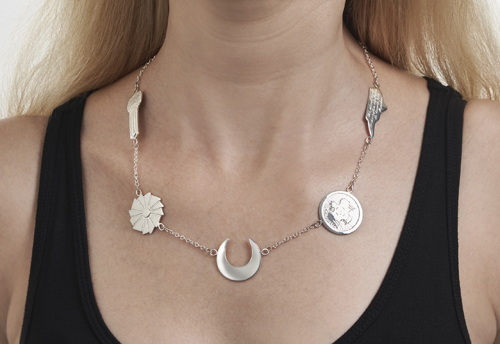 Captain Joshua Hadley served in the 1st North Carolina Regiment, Continental Army from 1775 until 1787. My design for this necklace was informed by detailed research I did on his service in the Revolutionary War. The five units comprising the necklace were hand pierced from sterling silver sheet and formed utilizing traditional silversmithing techniques. Each charm has a specific meaning and they are outlined below.

Captains wore an epaulette on their right shoulder to signify rank, so when worn that charm is the upper right side. Captains also wore a white cockade on their hat to identify their status, so the radiating circular shape is my interpretation of the ribbon rosette. The surface designs on the epaulette and cockade were hand drawn onto the silver sheet and then etched with an acid technique to create the textured lines.

The center form is a Gorget, which traces its history back to medieval times when it was worn as a piece of armor around the neck to protect the throat. Over time the shape, size, and function changed and by the 17th century it became a symbol of rank among military officers of many countries. At this point it was suspended around the neck with a chain or ribbon and was purely decorative. Additionally, the white crescent shape on the blue South Carolina flag is thought to be partly inspired by the Gorget shape. Captain Joshua Hadley fought in the Battle of Sullivan’s Island in Charleston, SC on June 28, 1776. The flag played a prominent role in the battle that day and the Americans successfully defeated the British, which was a turning point in the war and led to the signing of the Declaration of Independence. Therefore, the Gorget also represents Charleston in this piece and where I live. On the back of the Gorget is hand engraved “Captain Joshua Hadley”. 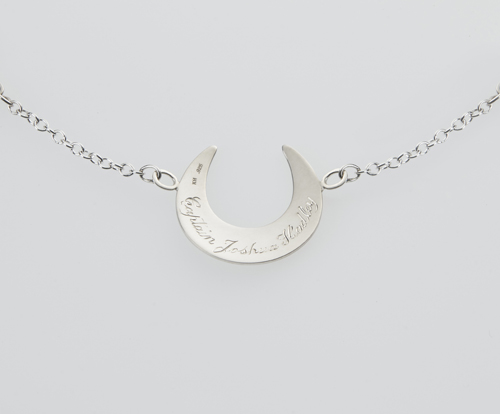 Back of Gorget charm on necklace hand engraved 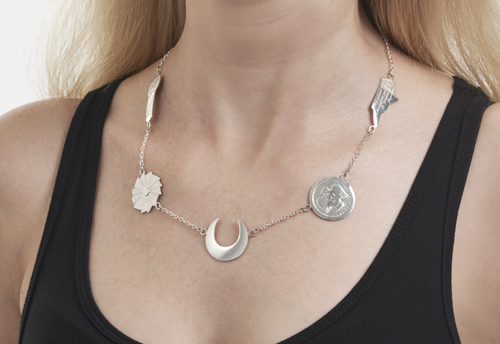 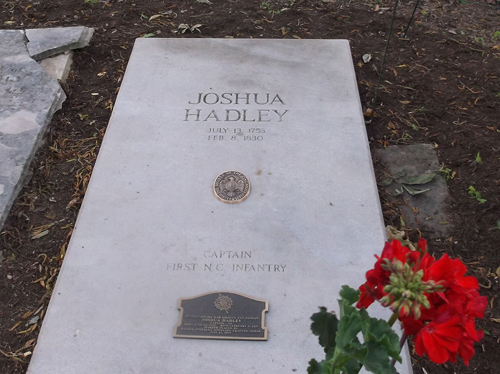 The final charm is in the shape of North Carolina, which represents his home state during the war and his Regiment. On June 20, 1775 he joined other patriots to form an association of the Sons of Liberty at Liberty Point in what is now Fayetteville, NC. The document they signed that evening contained the statement “We stand ready to sacrifice our lives to secure her freedom”. A granite memorial later erected at the site to commemorate the event includes their names and that statement. Hand engraved on the front of the state is that phrase and the date is on the back. 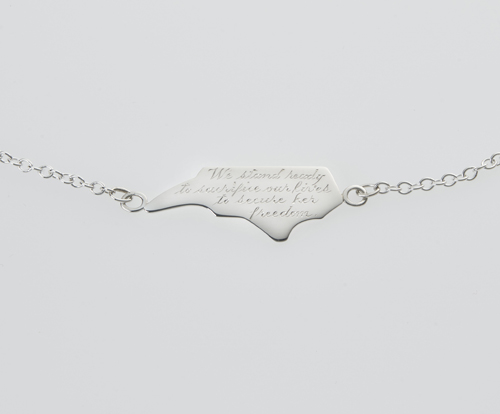 Back of North Carolina silver charm with hand engraving 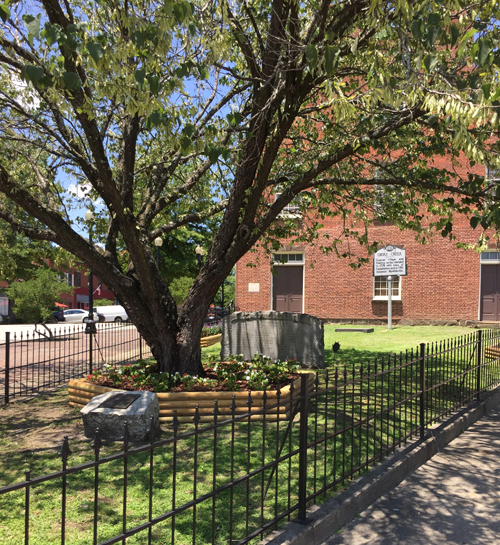 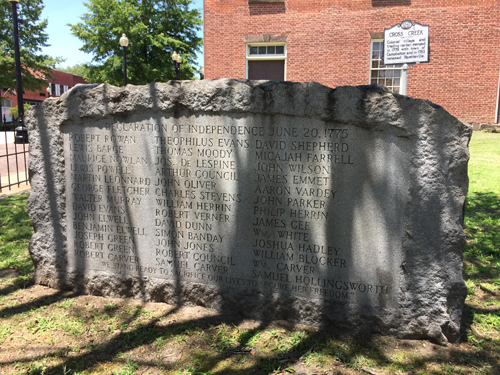 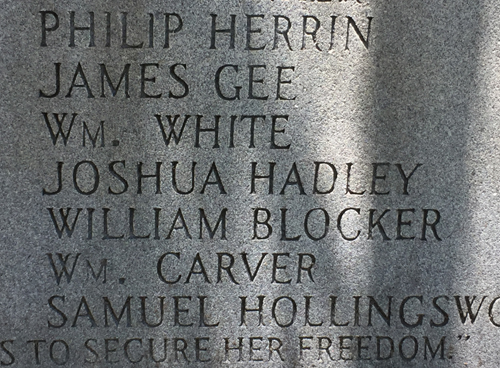 The theme of this year’s competition, Rise, and Shine Your Light on Your Revolutionary War Patriot, motivated me to dig deeper into my great-great-great-great-great grandfather’s military service in order to create an artwork representative of his patriotism. I thoroughly enjoyed the journey and learning experience, which broadened my knowledge of the war and put my artwork on a new path. The United States of America has an extraordinary history that should be studied, celebrated, honored, protected, and passed on to future generations proudly. Hopefully through this silver necklace Captain Joshua Hadley’s contribution to the American Revolution as well as that part of our great country’s history shines.

I will receive the award formally at DAR Continental Congress in June and I am so excited to highlight my wonderful Charleston DAR Rebecca Motte Chapter during this special event! Rebecca Motte’s father Robert Brewton and grandfather Miles Brewton were two of the most accomplished and talented silversmiths of colonial Charleston. Hopefully I am representing our chapter namesake well!

Through both this award and my involvement in DAR, an exceptional national non-profit organization and genealogical society, I strive to honor my American Revolution patriot and family heritage. For more information on DAR and our dedication to promoting patriotism, preserving American history, and securing America’s future through better education for children please visit http://www.dar.org/.